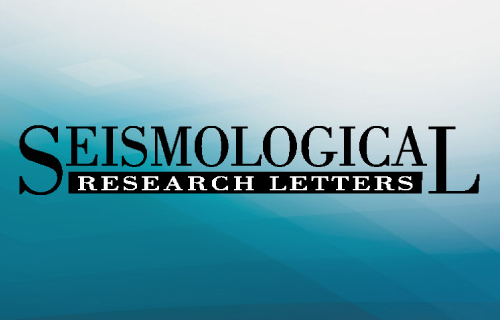 Earthquakes induced by subsurface industrial activities are a globally emotive issue, with a growing catalog of induced earthquake sequences. However, attempts at discriminating between natural and induced causes, particularly for anomalously shallow seismicity, can be challenging. An earthquake swarm during 2018–2019 in southeast England with a maximum magnitude of ML 3.2 received great public and media attention because of its proximity to operating oilfields. It is therefore vital and timely to provide a detailed characterization of the earthquake sequence at present, and to decide based on current evidence, whether the earthquakes were likely natural or induced. We detected 168 low-magnitude earthquakes and computed detailed source parameters of these events. Most earthquakes occurred at a shallow depth of 2.3 km, >1 km deeper than the geological formations targeted by the oilfields, and laterally >3 km away from the drill sites. We combine the east–west-trending cluster of the seismicity with 2D seismic reflection profiles to find the causative fault system for the earthquakes. A b-value close to unity and strike-slip faulting mechanisms are consistent with tectonic reactivation along a pre-existing fault. Overall, we find no indicators in the earthquake parameters that would strongly suggest an induced source. Nor do we find any clear trends between seismicity and drilling activities based on operational logs provided by the operators. Injected volumes are near zero and monthly production amounts are many orders of magnitude smaller than other reported cases of extraction-induced seismicity. On balance, and based on the available evidence, we find it currently unlikely that nearby industrial activities induced the seismic swarm. Most likely, the Surrey earthquakes offer a uniquely detailed insight into shallow seismicity within sedimentary basins. Nevertheless, self-reporting of injection and production times and volumes by operators, and the lack of easily and publicly available oilfield operational data continues to be a point of concern for local residents. 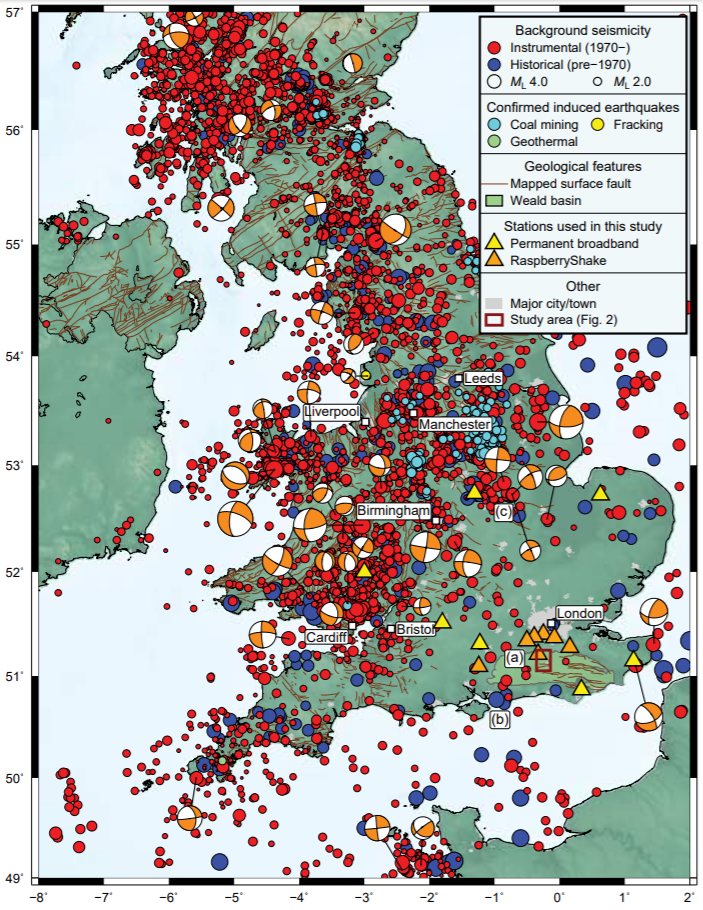 Figure 1. Regional context showingthe study area(brown rectangle), together with instrumental and historical seismicity context of England and Wales from the British Geological Survey (BGS) catalog. Induced earthquakes are from Wilson et al. (2015). Regional seismic stations used in this study are shown. Mapped surface fault traces come fromBGS (2019). Past earthquake focal mechanisms (orange focal mechanism plots) come from Baptie (2010) and from BGS annual earthquake bulletin reports. Labels (a) and (b) refer to the 2005 Billingshurst and 1811–1834 Chichester sequence, respectively, which are discussed in the Regional Seismological, Geological, and Industrial Context section. The color version of this figure is available only in the electronic edition.

Based on the available evidence and consideration of possible triggering mechanisms, we conclude that at present, it is unlikely that anthropogenic activities induced the 2018– 2019 Newdigate seismic sequence. We draw this conclusion from the following key observations of seismicity and hydrocarbon operations:

If all or some earthquakes were induced or triggered, then it would represent a novel mechanism not previously recognized for this style of oil extraction at the reported volumes.  We have shown that seismic activity can occur at shallow depths in sedimentary basins, especially where pre-existing faults are optimally oriented for reactivation in the regional stress field. This result has implications for understanding the background rate of seismicity close to hydrocarbon exploration targets. Such shallow seismicity could pose a moderate seismic hazard to areas of high-population density. Based on 2D seismic profiles, for this area of southeast England, east–west-striking faults with a normal sense of offset, and likely optimally oriented in the regional stress field, are widespread. Moreover, operators and regulators could consider operating small seismic monitoring networks near conventional oilfield operations to better understand any nearby emergent seismic sequences earlier and to reduce uncertainties.

The 2018–2019 Newdigate seismic sequence was a contentious issue among members of the public, oilfield operators, and campaign groups. Without detailed seismic observations offered by the installed temporary seismic network and nearby citizen seismology sensors, large uncertainty over the causes of the sequence may have remained for the foreseeable future.  Our knowledge of activities at Brockham and HH-1 relies on reported operational data provided by the operators. This source of data remains a controversial issue when determining induced versus natural causes of earthquakes. This particularly applies to industrial activities that lack any precedence for causing  Earthquakes, and for areas with a low rate of background seismicity. As operations continue in the long term, we recommend seismic monitoring close to hydrocarbon development and production sites, and high-resolution reporting of operational activities (e.g., well shut-in periods, production volumes, and rates) that is visible to the public. Over time, long-term monitoring could help reduce uncertainties in correlations and casual factors. We have shown that the 2018–2019 Newdigate, Surrey earthquakes offer new insight into the seismogenic potential of shallow sedimentary basins and the seismic hazard associated with these swarms.

From all of us at Raspberry Shake a special thanks to Stephen P. Hicks, et al. for conducting this study and writing this paper