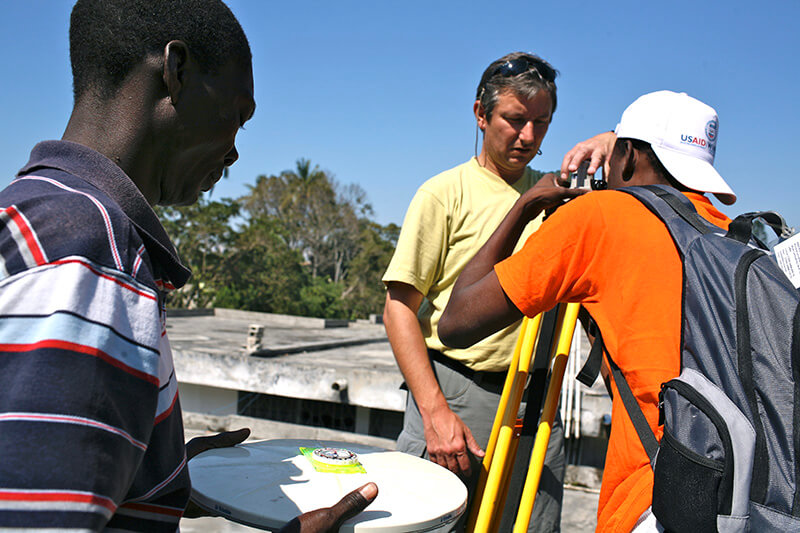 Eric Calais received a PhD at the University of Nice in 1991, was postdoctoral researcher at Scripps Institution of Oceanography (USA) until 1995, research scientist at the CNRS (Nice) until 2001, professor at Purdue University (USA) until 2012, and joined Ecole Normale Supérieure in 2013.

He received the Faculty Scholar Award from Purdue University in 2005, the Jacob Award from the French Academy of Sciences in 2008, and the Frank Press Award from the Seismological Society of America in 2012. His research interests concern the kinematics and dynamics of active tectonic processes, which he studies using space geodesy and deformation modeling. He led a number of field experiments worldwide – Caribbean, central Asia, east Africa, western Europe — to study individual earthquakes, volcanic events, the deformation of plate margins, and the motion of tectonic plates. A significant component of his research is devoted to understanding active geodynamic processes and earthquake hazard in the northern Caribbean, with a focus on Cuba, Haiti, and the Dominican Republic.

Nine years after the devastating magnitude 7.1 earthquake that struck Haiti on January 12, 2010, the first Raspberry Shake (RS) station installed in the country (R30E2) recorded its first local earthquake (See below). At the time the national seismic network, which consists of eight broadband Nanometrics seismometers with VSAT communication capabilities, was inoperative.  The RS station is located in a noisy part of Port-au-Prince but the event — not felt by the population — is clearly visible in the data. This RS instrument is part of the pilot phase of a larger project with two concurrent objectives. One is to complement the national seismic network; the other is to engage citizens on seismic risk reduction through an active involvement in earthquake monitoring (Calais et al., 2019 — open access).

The January 12, 2010 Haiti earthquake put this impoverished country on the map for many of us unaware of the recurrent difficulties it had been enduring over the past decades. The earthquake cost more than 200,000 lives and about 11 billion dollars – close to 100% of the country’s GDP, and was a major hit to Haiti’s fragile economy. Science-wise, the pre-earthquake scene was daunting: no seismic network, no in–country seismologist, no active fault map, no seismic hazard map, no microzonation, no building code.

In the years following this earthquake, Haiti received funding and training to install and operate a national seismic network, hosted at the Bureau of Mines and Energy. A total of eight broadband seismic stations are currently in place. However, when a magnitude 5.9 earthquake struck northwestern Haiti on October 6, 2018, causing 17 fatalities and significant structural damage in the larger cities of the epicentral area, only one of them was operational. The continued efforts of the Bureau of Mines and Energy to operate the national seismic network are clearly not sufficient to overcome the chronic lack of resources – financial and human – necessary to maintain such a high-technology system. This issue is of course not specific to Haiti and, outside of the private sector, is shared by most developing countries. 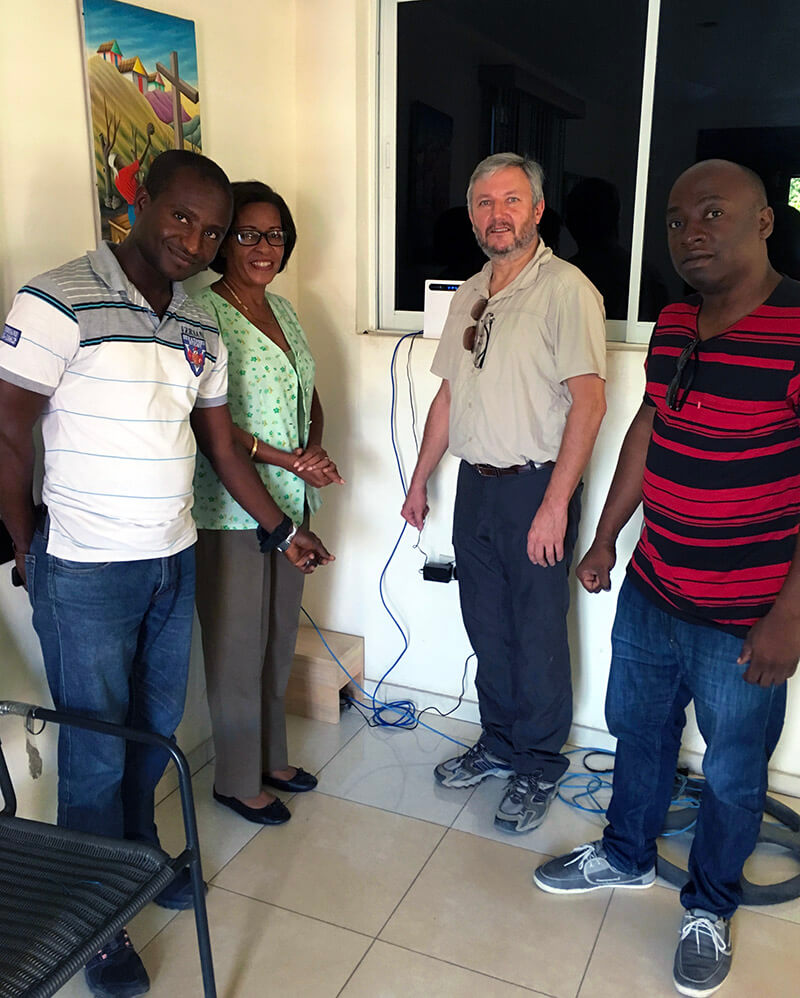 Left: Pierre-Guild Mezil, host of RS station R8EFE in Jérémie. The RS is located on the floor in a corner of his living room. Right: Mrs Carmen Beaulieu, host of RS station R897D in Jacmel — the RS is hidden under a small wooden table built for the occasion. From left to right, J. Berthony (Bureau of Mines and Energy), Mrs Beaulieu, the author, and S. Symithe (State University of Haiti).

HELPING TO ENGAGE CITIZENS ON THE NEED FOR EARTHQUAKE PROTECTION

While Haitian seismologists struggle to maintain a seismic network, the public is in demand for reliable information about earthquakes, tsunamis, and the associated risks. Over the years in Haiti I have encountered countless numbers of citizens, businesses and schools eager to learn about earthquakes and to hear what to do to prepare and reduce their vulnerability.  But the lack of reliable information stemming from a chronically inoperative network provides ground for fake seismo-news to develop and propagate. For example, the notion that earthquake prediction has already been around for years so earthquake monitoring is irrelevant! In response to this, being effective at communicating about earthquakes requires of course scientific information properly translated into layman’s terms. Furthermore, and this is equally important, consistent and continuous information about earthquakes. One often says that large earthquakes provide “teachable moments” for earthquake preparedness and risk reduction, but they do not happen often. Small ones however happen all the time, the vast majority of them unfelt… Could we catch them, then use them as a vehicle to promote earthquake safety?

RASPBERRY SHAKE SEISMOGRAPHS … OR NOTHING!

This is where Raspberry Shake (RS) stations come into play. Their low cost, and ease of installation and maintenance makes it possible to imagine a situation where perhaps as many as 100 citizens, businesses, or schools throughout Haiti would host an RS station! Even though RS stations would most likely concentrate in major cities, their redundancy would alleviate inevitable operation and maintenance issues at any single station. Then our ability to detect small magnitude earthquakes on a continuous basis would be much improved, resulting in a better understanding of earthquake distribution and fault behavior in Haiti. In addition, seismometers in people’s homes may be a way to initiate a conversation with the population on earthquake risk. For instance using felt earthquakes as “teachable moments” via social media in order to promote the emergence of a culture of earthquake safety. 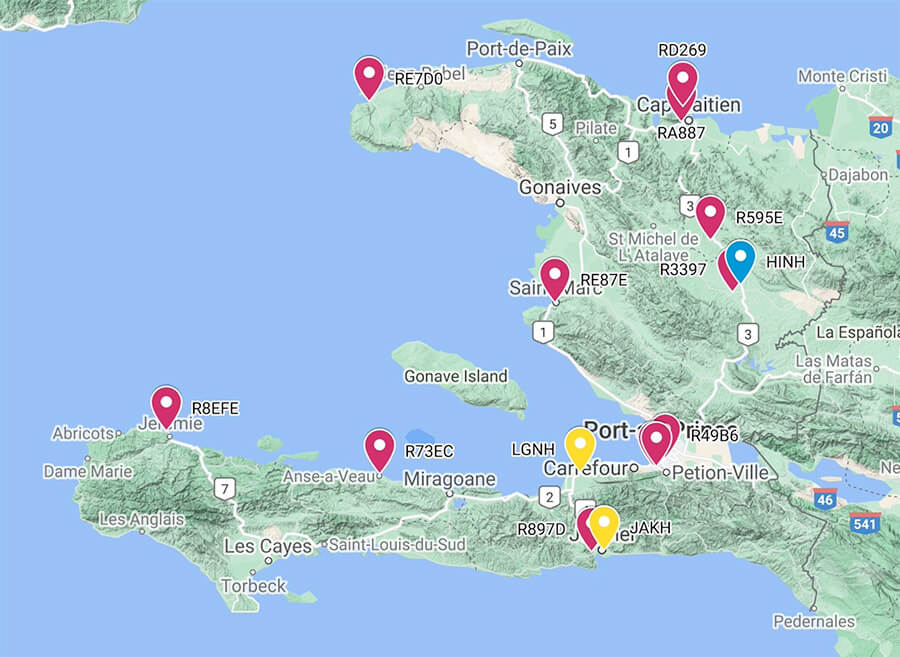 I went to Haiti in January 2019, tasked by my Haitian and French colleagues to install 9 RS instruments (5 RS1D’s and 4 RS4D’s). Together with our Haitian partners we set off to scatter the stations throughout the country. We did this while keeping the RS4D’s within the perimeter of Port-au-Prince in order to be able to use their accelerometer to study site effects in case of strong ground motion. We selected the RS hosts amongst people we knew had quasi-continuous Internet and electricity, the latter being a major issue in Haiti. Internet access on the other hand is quite good in most cities as long as one has power! Installations were straightforward. We simply laid the RS instruments on the floor of the most quiet first story rooms we could find and connected them to power and Internet via an Ethernet cable or via WIFI. We made it clear to the hosts that the RS stations would use very little power and Internet bandwidth, but that they should contact us if they suspected any issue. We also told them that they were free to disconnect the RS in case of a problem.

A VIRTUAL SEISMIC OBSERVATORY IN HAITI BASED ON RS STATIONS

In parallel to the field effort, engineers at the Géoazur Laboratory (Nice, France), partner of the project, used their experience of real-time earthquake monitoring in southeastern France to implement a similar system for Haiti. This was based on a mix of citizen-hosted RS’ and of seismic stations operated by national observatories in Cuba, Jamaica, Haiti and the Dominican Republic. The real-time data streams fed into an automatic earthquake detection system based on SeisComP that determines earthquake locations and magnitudes, later double-checked by a seismologist.

The final product is displayed on a web interface at http://ayiti.unice.fr/ayiti-seismes/, which has been operational since August 1, 2019. The map view of earthquake locations and magnitudes is straightforward for most users, even those with no experience in seismology. The web interface provides a number of other features tailored for RS hosts and/or for seismologists. For instance, a host can find out how many earthquakes their RS recorded over the past ten days. Also, one can display a catalog of events for Haiti over any time interval. RS hosts often react with “I never knew there were so many earthquakes in Haiti!” Very few of them are felt indeed, but each of them is a reminder of the seismic hazard level. 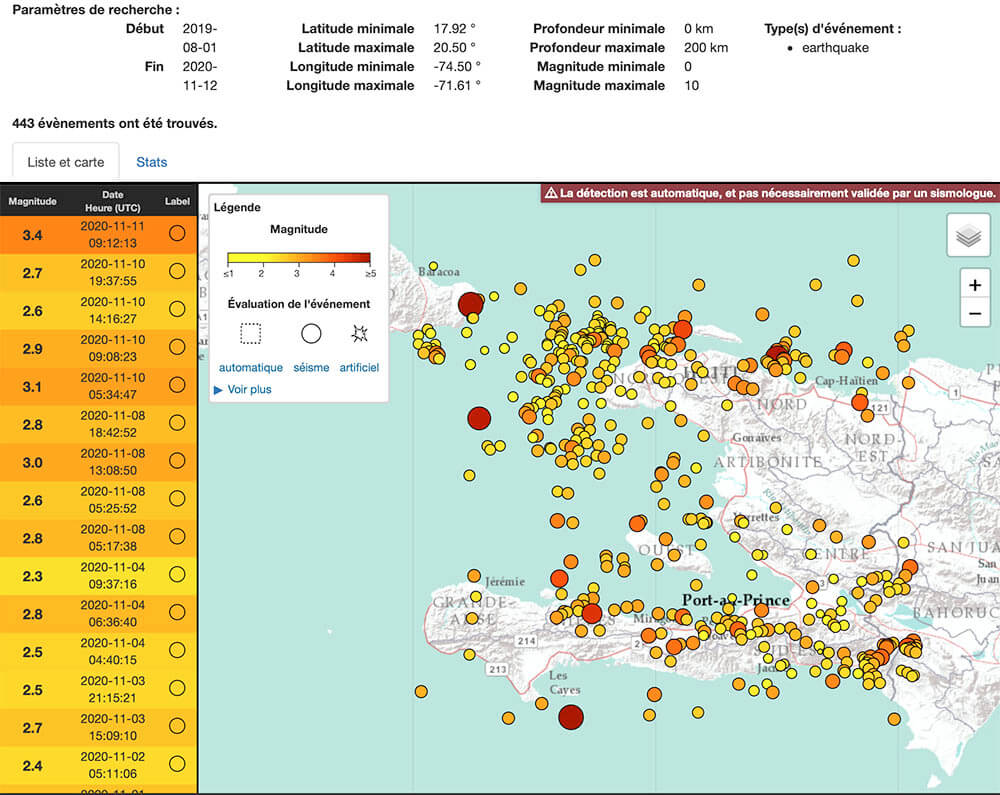 Catalog of earthquakes recorded by ayiti.unice.fr/ayiti-seismes/, a virtual seismological observatory based in a large part on RS stations in Haiti, from August 1, 2019 to November 12, 2020. A total of 443 events were detected and localized, with a completeness magnitude close to 2.5. The seismicity is more diffuse than anticipated, a surprising but important result that will be prompting more regional seismotectonic studies.

FROM SEISMOLOGY TO SOCIOLOGY: UNDERSTANDING PERCEPTION AND NEEDS

A key aspect of our project is to use RS instruments as a way to engage citizens in earthquake preparedness. This is no easy task in a country where reducing poverty is the core issue. We are working with sociologists, geographers and anthropologists from Haiti and France to better understand the perceptions and needs of citizens. We started with an online questionnaire that received more than 1,200 responses. We refer readers to Calais et al. (2020 — open access) for a preliminary analysis of our findings. We are currently analyzing the results of a series of interviews with RS hosts that are likely to tell us a lot about how RS’ are perceived and used, what information is actually needed, in what form, and how RS hosts could, perhaps, become agents of change in their communities.

Based on the lessons learned during this pilot experiment, our goal is now to push forward and engage the civil society and the private sector to be a bigger part of this project. For the sake of having more RS stations, hence redundancy and continuity of service, but also so that RS hosts are engaged in a project that puts them at the center of the information chain. RS hosts will become information providers to scientists rather than passive listeners to scarce and often unintelligible information. It is our hope that they will become more aware of the earthquake issue, will share information they will be privy to, and will become advocates of seismic monitoring, but more importantly of seismic risk reduction.

At Raspberry Shake we would like to say a huge thank you to Eric Calais for sharing details of his fantastic project. It is great to see the positive impact your project is having on the country!