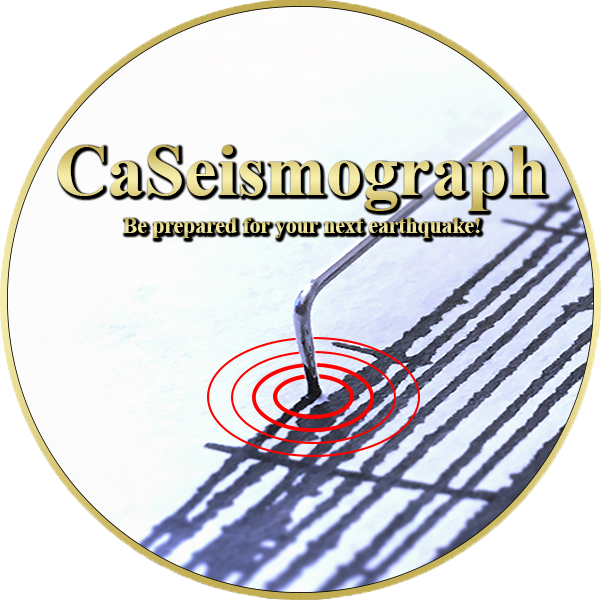 This is the story of how and why I started my YouTube channel, CaSeismograph, featuring a self made seismograph/drum streaming Southern California seismic activity and incorporating the marvelous Raspberry Shake.

But first let me introduce myself. I am Jon Sammels and in 1986, I moved to the U.S.A. from a small city called Amersfoort that is located 50 miles southeast of Amsterdam in the Netherlands. In order to give this story the flavor it deserves, we will have to take a trip back in time to my arrival in the United States in 1986, when I first came across from Europe.

A SHAKY WELCOME TO CALIFORNIA!

I arrived in California, traveling by car over the Altadena, Pasadena mountains. I was planning on meeting a friend of mine who I met in Europe earlier that year, she resided in Pasadena. As I traveled late in the evening over the mountains, the Los Angeles lights came into view. The lights were breathtaking, and that night I decided to park my car in an empty parking lot and fall asleep to the view of those spectacular lights. 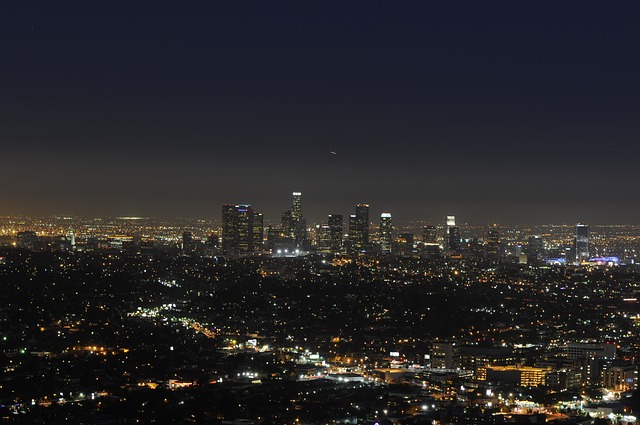 It was between 2 and 3 in the morning when I woke up to my car being violently shaken. Still blurry eyed and half asleep, my first thought was that the police were the cause of the shaking, to tell me I wasn’t allowed to spend the night in the parking lot. However, as I got out of the car to see what was going on, it became clear that there was no one in the near vicinity. It was very windy at that moment but there was no way the wind could have shaken my car like that.

The next morning I met up with my friend. Her first question to me was, “When did you arrive in California?”. I replied “Last night.”, to which she said excitedly, “Then you must have felt the earthquake this morning.”

This interaction left me a little confused. At the time I had never even heard of the word earthquake! So she started to explain to me what earthquakes are and told me that there are fault lines underneath California. I stood there bewildered while intriguingly listening.

After her story I realized it had been the Earth who had decided to wake me up that early morning by shaking the whole mountain!!! This fact was mind boggling to me, and it was this moment that changed my whole life. I became very interested in earthquakes and wanted to learn as much as possible about them.

Despite having majored in Mechanical Engineering, my interest in earthquakes became so strong that not only did I start studying Seismology.  I changed my job as well and moved into the industry of downhole surveying. I worked for years operating gyroscopes and magnetic surveying equipment.

STEPPING INTO THE LIVE SEISMIC FEEDS

Fast forward to late 2012.  On an early morning as I was still reading and researching about earthquakes, I stumbled upon the 24/7 ABC7 Live seismograph feed. This was a channel with a live seismograph that gave a beautiful 2D clear visual on paper of when an earthquake occurred in Southern California. On the side it had a chat box filled with comments of people talking about earthquakes and the technicalities of the machine everyone was watching. 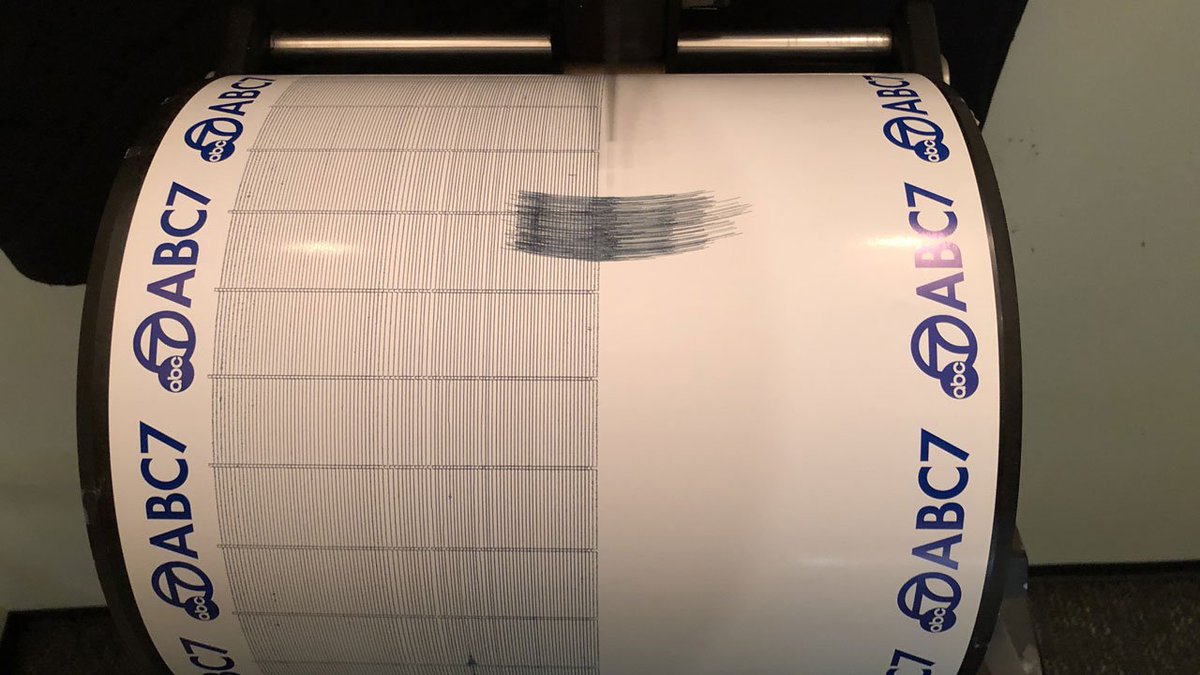 A number of years passed and I had gotten very familiar seeing this drum, but unfortunately ABC7 was unable to maintain their seismograph any longer, and the live feed was shut down. This also led to the demise of the group which I had been so involved with and I remember saying out loud at the time, “This cannot be happening!”

Disheartened but not defeated I decided to purchase my own drum and started a frantic search across the USA to find one to fill the gap that had been created. After months of searching and even involving family, friends, and loved ones across the world, the answer was clear as to why a huge news station like ABC7 had given up on their physical drum. The old technology was no longer produced or even supported. Sadly, I had to give up my search.

Every summer, my father came to visit me from Holland. Being one of the family members who had helped in the search to find a physical seismograph/drum in Europe, he was well aware of my whining about the disappearance of my favorite site and the lack of options to be able to buy one. When the need becomes the greatest the answer becomes most clear and in 2016 on his annual visit to see me he shared his latest thoughts on the matter.  I would have to build my own! Agreeing with him, right away I started looking for the material to make my first ever seismograph/drum.

BUILDING MY OWN SOLUTION

My dream was to reproduce the drum like the ABC7 feed, and if possible, improve on it.

As my father headed back home, I got to work on it. Within less than two years, through much trial and error, I finally had my first machine up and running. Unfortunately, this first machine only registered movement I created, so I went back to the drawing board and created version 2. Not getting the results I was hoping for I improved on this one and created version 3. 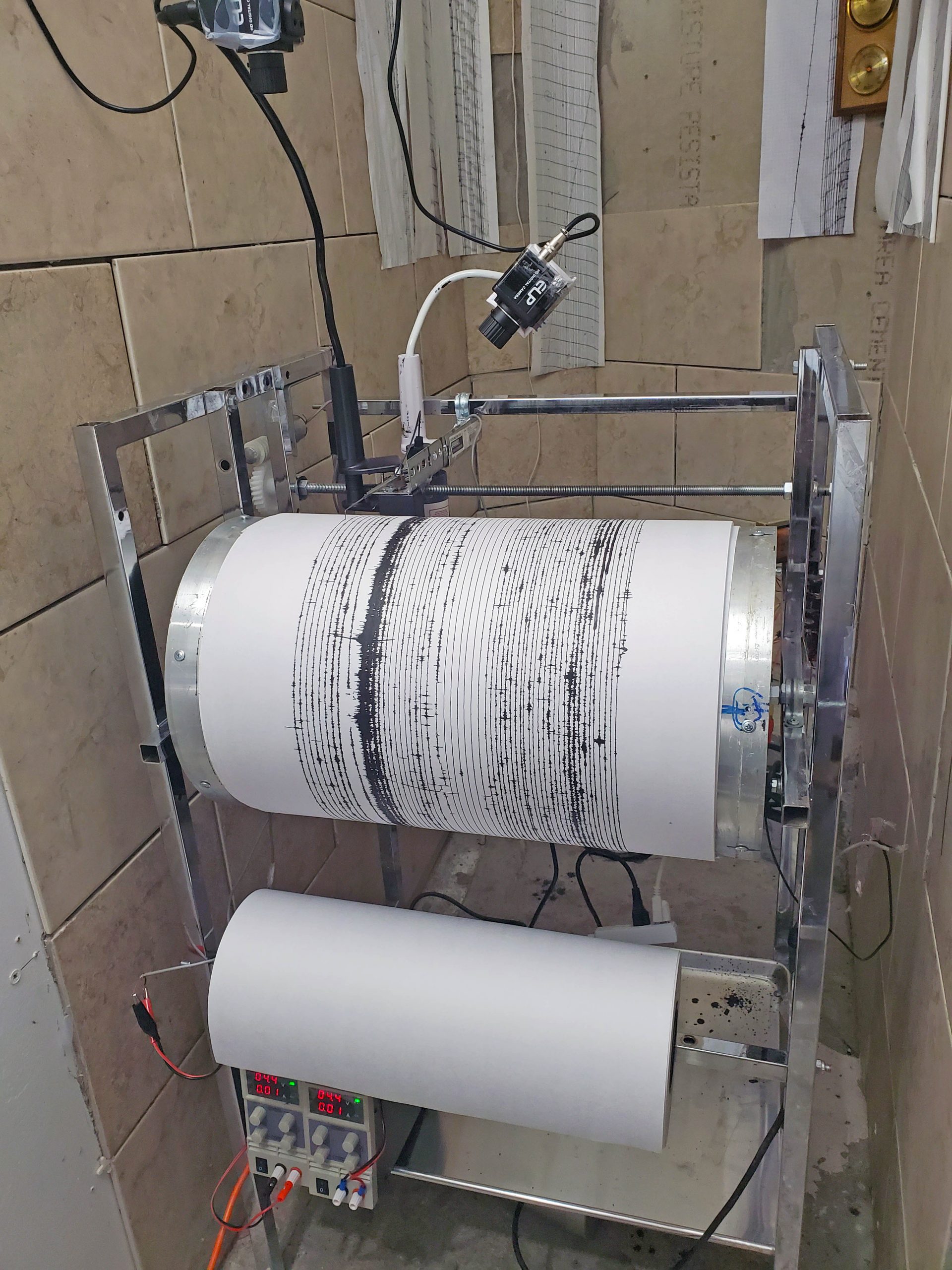 This is version 3 of my seismograph set up and it works insanely well. Even to this date it is still running. The only drawback is that we live in Garden Grove where the seismograph picks up a lot of urban noise, so during the daytime we have to turn down the sensitivity.

My vision of recreating the ABC7 live feed started to become a reality. I put cameras on the seismograph and started live streaming it onto my YouTube channel called CaSeismograph.

In 2018 we found Raspberry Shake. A fantastic company that creates box size seismographs you can purchase and put in your home. With an internet connection anyone can connect their device and see it on the Raspberry Shake Station View interactive map. This map displays all of the Raspberry Shake seismographs currently online and from around the world, and even shows each station’s general location. When a station is selected, the local seismic data of that area is displayed. 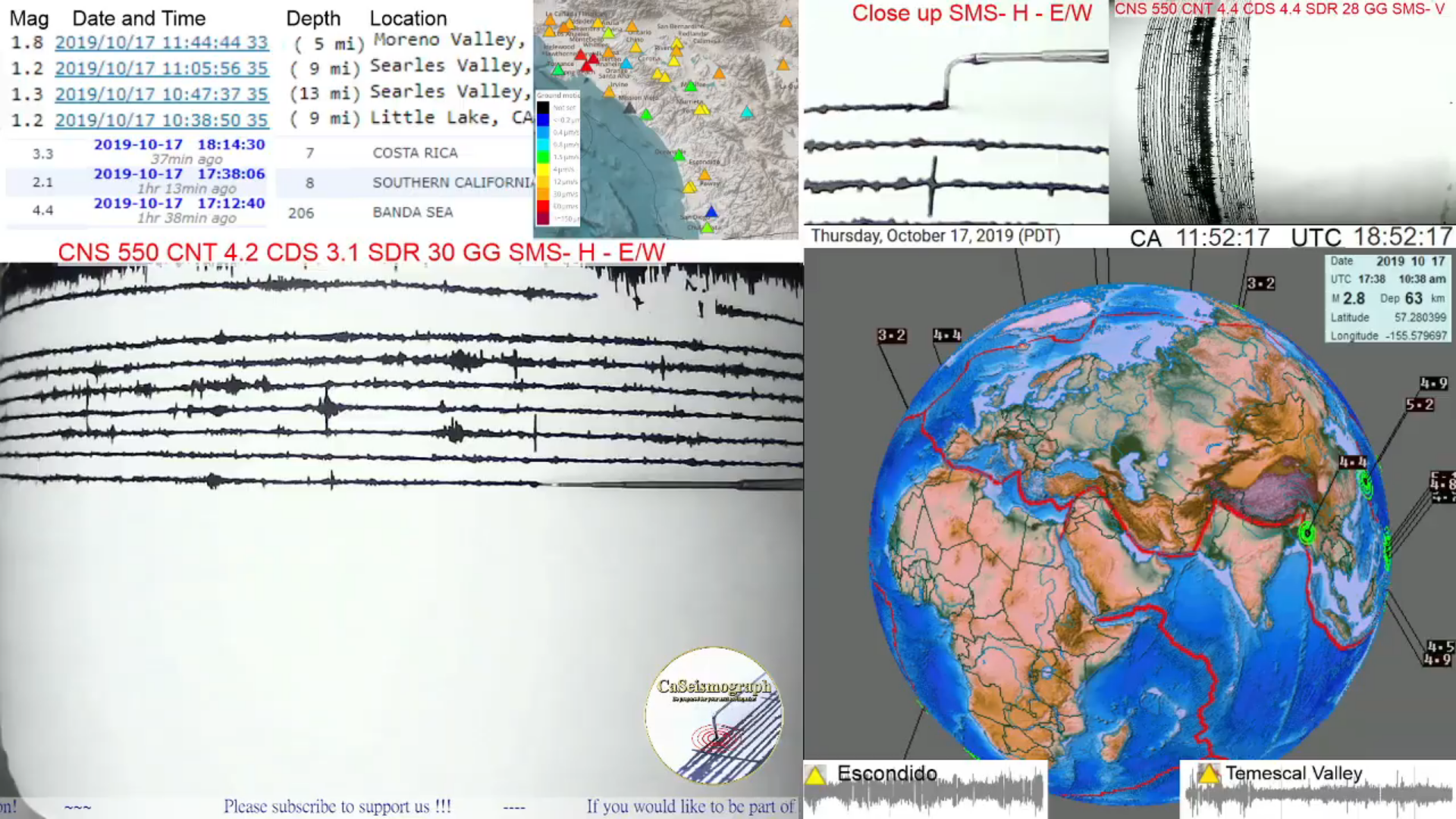 The image above shows the essence of what CaSeismograph is. A YouTube channel that broadcasts two self made seismograph drums in Orange County, USA.

Our live stream shows our homemade physical drums with a 24/7 feed of real-time ground motion for the city of Garden Grove with a list of current updates on California earthquakes and worldly events. The cut out of the Raspberry Shake map represents the areas of LA, Orange County, San Bernardino and Riverside Counties. Also featured are live feeds from two active Raspberry Shake seismograph stations. One is owned by a volunteer for our channel and the other is run directly from CaSeismograph. Lastly is our spinning globe, which shows all the world’s earthquake events from the last 24 hours, magnitude 4.0 and above.

Currently, our setup uses OBS Studio to stream onto our YouTube channel. OBS is an easy to use an open broadcasting service that can link to YouTube streaming services. It has the ability to change layout while broadcasting live without seeing any permanent changes saved until you are satisfied enough to commit to the new layout.

I would not say that the current layout on our stream is concrete. We are always looking to improve our information on earthquakes to the public. We strive to provide our audience with the best way of understanding our seismographs and easily learn additional information about earthquake events. We have tried different camera angles and different layouts and also asked our viewers for feedback. Our current layout is the result of our audience’s input combined with our own opinions on what important information should be presented.

In our process of growth CaSeismograph has adopted the Teaching, Information, and Preparation (T.I.P.) standards.

Just lately Southern California experienced a 6.4 and 7.1 earthquake which was located near the city of Ridgecrest. California is an active earthquake area and it is important to be prepared. This is why at CaSeismograph we are putting a special focus on teaching preparation to the public in the event of an earthquake disaster.

Southern California was very lucky that these 2 major earthquakes events occurred over 150 kilometers away from the densely populated city of Los Angeles and not on the San Andreas fault. Our recordings clearly reflect the power of mother nature. You can see our Seismograph recording of the 7.1 Ridgecrest Earthquake here.

This is why CaSeismograph has adopted the T.I.P standards. In our honest opinion, Californian residents are not prepared for the possibility of a major earthquake occurring on the San Andreas fault line. People have cried out too many times that the “Big One” is just around the corner in California  This unfortunately has contributed to the local community becoming more desensitized to the possibility of a major earthquake occurring close to a city in the area. At CaSeismograph we are actively trying to dissuade this stigma of “crying wolf” and raise awareness by using our live stream to help persuade visitors of our channel to become better prepared.

At the time of writing CaSeismograph is fortunate enough to have over 35 volunteers from diverse backgrounds that help maintain and monitor our 24 hour YouTube live stream.

THE FUTURE OF HUMANKIND IS ON EARTH, NOT IN THE STARS! 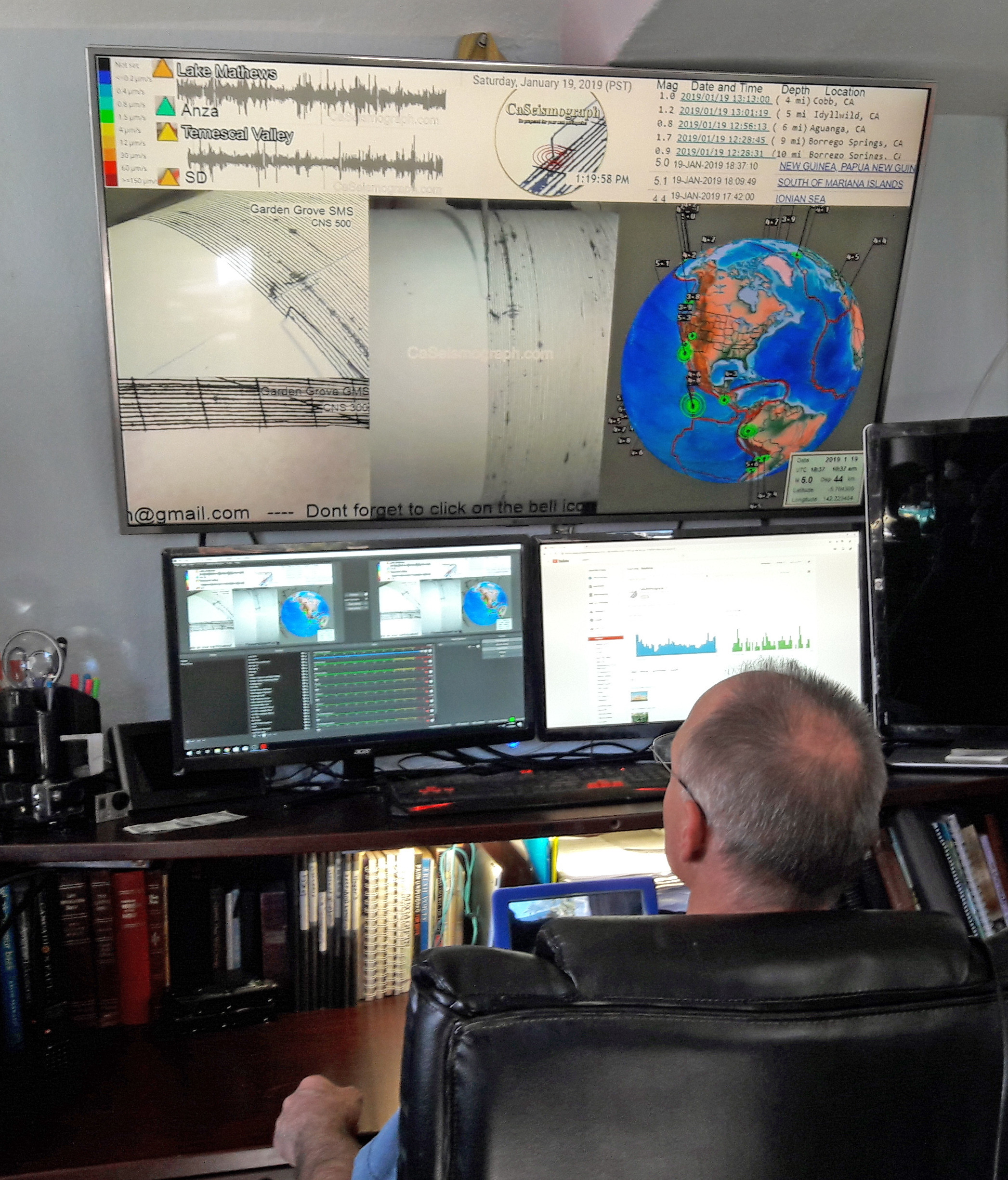 As our community grows, our aspirations grow with it. We are not looking towards the skies and stars for the future. Instead we have our heads down listening and waiting for the Earth to move. For when it does, CASeismograph will be ready to listen and document it. Our goal is to continue educating the masses. To inform people that even though earthquakes are potentially dangerous, you are able to mitigate the damage of one by being ready and prepared for when it does happen.

To see our live stream for yourself please go to: www.CaSeismograph.com

Thank you so much to Jon Sammels, CEO of CaSeismograph, for sharing details of his very own drum seismograph and incredible live streaming YouTube channel incorporating Raspberry Shake. It is great to see more people take more interest in what is Shaking around them.