Research published in the journal Science, using a mix of professional and Raspberry Shake citizen seismic data, finds that lockdown measures to slow the spread of the virus COVID-19 reduced seismic noise by 50% worldwide. 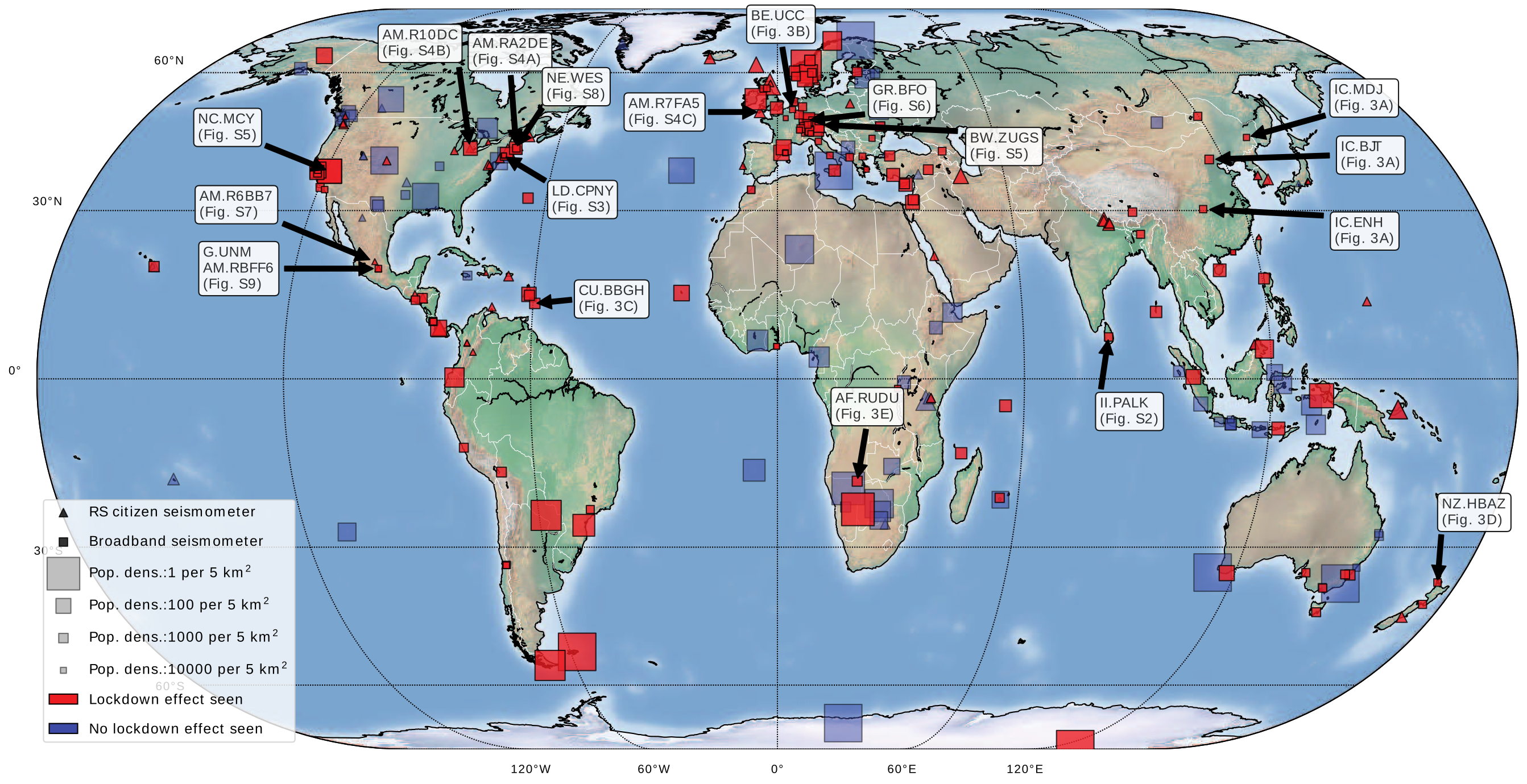 Research published in the journal Science has shown that lockdown measures to combat the spread of COVID-19 led to a 50% reduction in seismic noise observed around the world in early to mid 2020.

By analyzing months-to-years long datasets from over 300 seismic stations in 78 countries, including 65 Raspberry Shake seismographs, the report was able to demonstrate that ambient seismic noise levels were reduced in many countries and regions around the world, making it possible to visualize the resulting “wave” starting in China, then moving to Italy and the rest of the world. This seismic noise reduction represents the total effects of physical / social distancing measures, reduced economic and industrial activity, and drops in tourism and travel. The 2020 seismic noise quiet period is the longest and most prominent global anthropogenic seismic noise reduction on record.

The study was spawned after the lead author, Dr. Thomas Lecocq, decided that the best way to tackle the problem of analyzing data from all around the globe was to share his method with the seismological community. This started a unique collaboration involving 76 authors from 66 institutions in 27 countries. The study’s lead authors are based in Belgium, the United Kingdom, New Zealand and Mexico.

Seismometers are sensitive scientific instruments to record vibrations traveling through the ground – known as seismic waves. Traditionally, seismology focuses on measuring seismic waves arising after earthquakes. Seismic records from natural sources however are contaminated by high-frequency vibrations (“buzz”) from humans at the surface – walking around, driving cars, and getting the train all create unique seismic signatures in the subsurface. Heavy industry and construction work also generate seismic waves that are recorded on seismometers.

There are many thousands of seismic monitoring stations around the world, and it took a team effort to download, process, and analyze the many terabytes of data available. Data came from high-end seismic monitoring networks, as well as Raspberry Shake citizen seismic sensors, sharing data to a global community. Raspberry Shake operates the largest singular network of real-time seismographs in the world, which are used in various applications including research, professional vibration monitoring, and by hobbyists. The research involved major collaboration between academic and citizen scientists using this network.

“This is a great example of the type of role citizen seismology can play in contributing to the scientific record,” Raspberry Shake chief scientist Ian Nesbitt said in a statement. “We are very proud of our community’s involvement in this unique study.”

While 2020 has not seen a reduction in earthquakes, the drop in the anthropogenic “buzz” has been unprecedented. The strongest seismic noise reductions were found in urban areas, but the study also found signatures of the lockdown on sensors buried hundreds of meters into the ground and in more remote areas, such as in Sub-Saharan Africa.

The study found a strong match between seismic noise reductions and human mobility datasets drawn from mapping apps on mobile phones and made publicly available by Google and Apple. This correlation allows open seismic data to be used as a broad proxy for tracking human activity in near-real-time, and to understand the effects of pandemic lockdowns and recoveries without impinging on potential privacy issues.

The environmental effects of the pandemic lockdowns are wide and varied, including reduced emissions in the atmosphere and reduced traffic and noise pollution impacting wildlife. This period of time has been coined “anthropause”. This new study is the first global study of the impact of the anthropause on the solid Earth beneath our feet.

Will the 2020 seismic noise quiet period allow new types of signals to be detected? The study has shown the first evidence that previously concealed earthquake signals, especially during daytime, appeared much clearer on seismic sensors in urban areas during lockdown. The study’s authors hope that their work will spawn further research on the seismic effects of lockdown. Finding previously hidden signals from earthquakes and volcanoes will be one key aim.

With growing urbanization and increasing populations globally, more people will be living in geologically hazardous areas. Therefore it will become more important than ever—especially with the rising popularity of citizen seismology—to characterize the anthropogenic noise humans cause so that seismologists can better listen to the Earth, especially in cities, and monitor the ground movements beneath our feet.

Full details of the study can be found in the report. Press release originally published here.