LIVING IN AN EARTHQUAKE HOTSPOT WITH A RASPBERRY SHAKE! 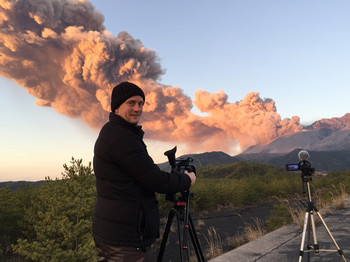 Earth Uncut TV is one of the world’s leading specialists in documenting extreme forces of nature and natural disasters in the Asia Pacific region and around the world. The company was founded by James Reynolds in Hong Kong in 2012.

For someone whose career involves closely monitoring natural phenomena and disasters around the world – volcanic eruptions, typhoons, hurricanes and floods – earthquakes appeared relatively late on my radar. Growing up in the UK, every couple of years the newspaper headlines would proclaim there’d been some terrifying temblor; a M3 point something that I’d always sleep through and miss. Earthquakes were always an exotic, foreign threat menacing people far away.

Even after packing up and moving to Shanghai, China in 2006 then onto Hong Kong I was still far enough from the usual hotspots and earthquakes.  They were something I seldom ever thought about. That all changed in late 2016 when I moved to Tokyo with my family and found myself living in one of the most earthquake prone regions in the world. I quickly got accustomed to the local “earthquake culture” that exists here, the threat of a destructive event that hangs over everyone every day.  And of course the earthquakes themselves, mostly small and arriving on average once a week but sometimes more often; it’s not uncommon to feel two earthquakes in a single day. The novelty of my phone chiming with an incoming seismic alert and the gentle shaking of the ground never gets old.

When the opportunity came to get hold of a Raspberry Shake seismograph I jumped at the chance. Japan is blessed with one of the most sophisticated and widespread seismic monitoring networks in the world. This is due to a legacy of multiple massive disasters, lessons learned and significant investment. In addition to this, an earthquake early “warning” system is widely used. The faint seismic waves preceding the main shaking are detected and alerts sent out via mobile phone networks or a dedicated app to give residents a few seconds warning of impending danger. 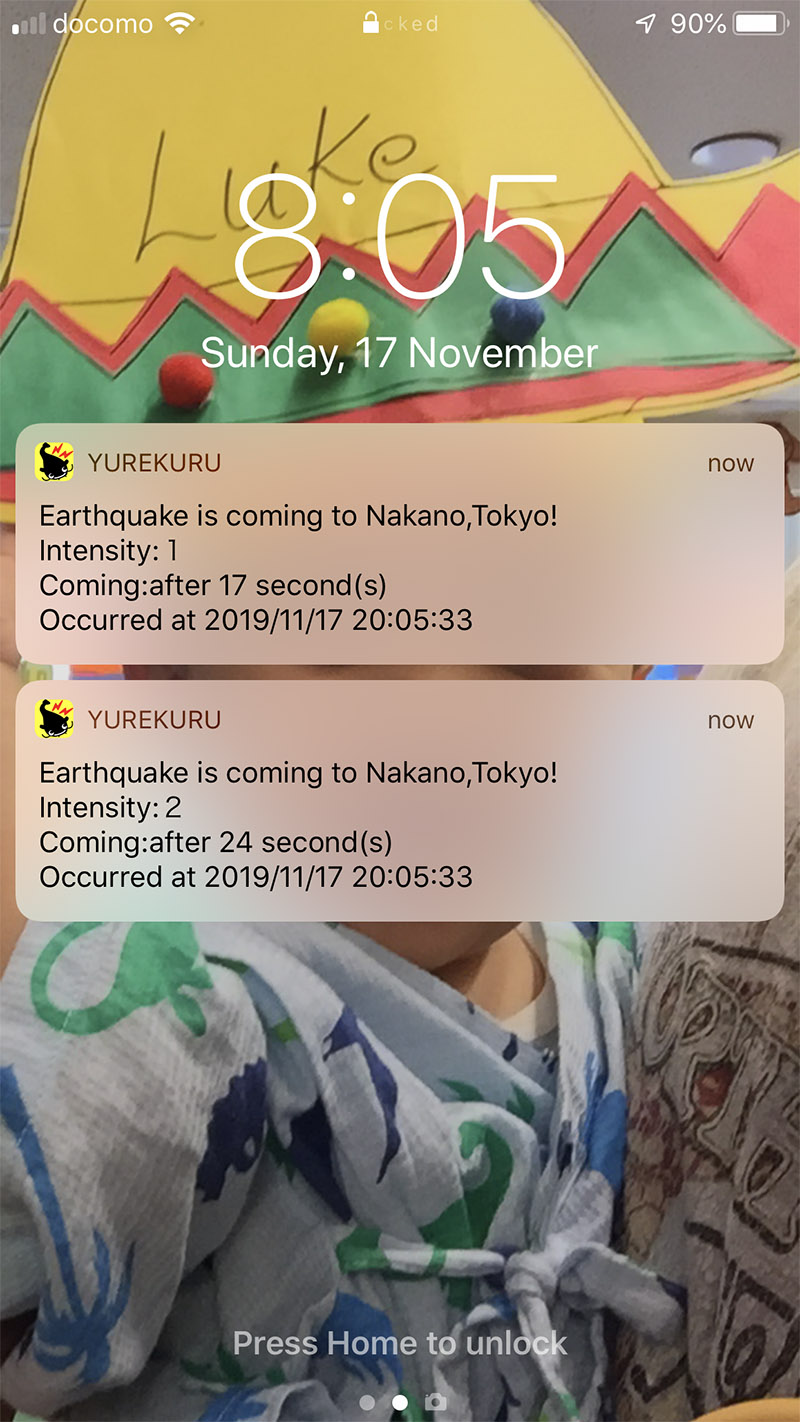 The Raspberry Shake coupled with these freely available resources gave me an unparalleled look at the fragile and unstable earth literally beneath my feet.

Earthquakes in Japan are measured on their own seismic intensity scale called Shindo. This runs from 1 to 7 with 5 and 6 subdivided into 2 levels, plus and minus. 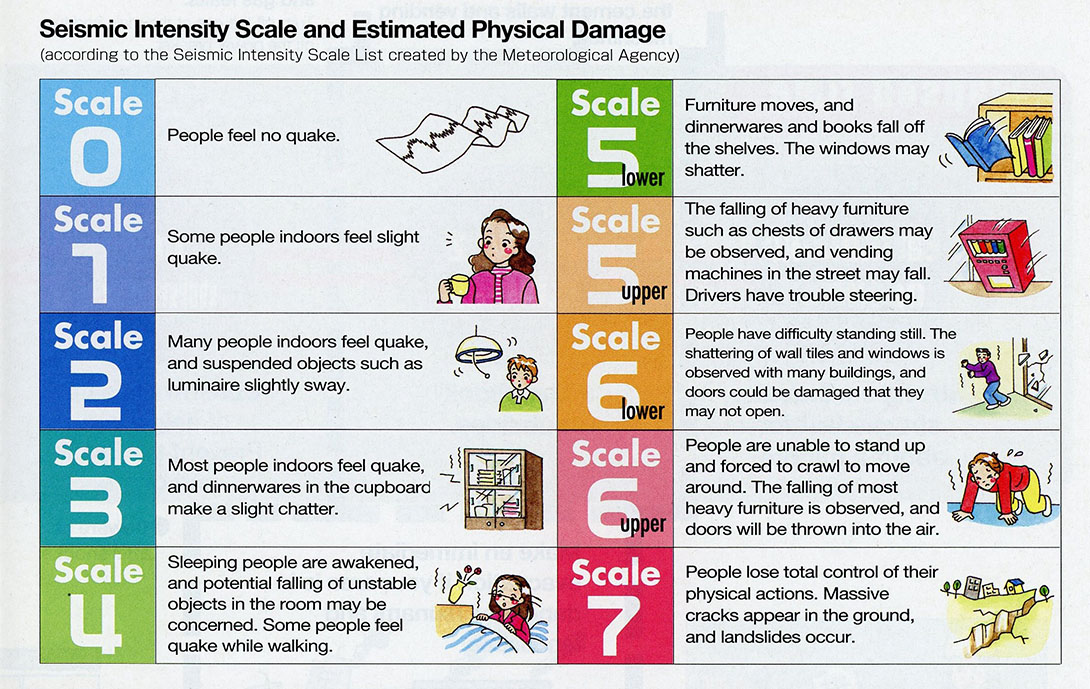 An explanation of the Shindo scale

Most of the earthquakes I feel are a 1 or 2. 3 or above are very noticeable and rattle the nerves but also leave some awesome traces on my Raspberry Shake.

I deliberately have my early warning app called Yurekuru set to the most sensitive setting. Every time it “forecasts” a Shindo 1 shake I know immediately a “local” event has taken place (see the mobile app screenshot above). This satisfies my inner earthquake nerd. When I’m at home these warnings also give me time to load up Swarm (the software for interpreting the Raspberry Shake data from the USGS) and watch the seismic waves arrive in real time.

Watching a Shake roll in with SWARM

I keep a dedicated folder on my PC with logs of close to 50 “felt” earthquakes since I acquired the device in July 2019. I’d confidently say the Tokyo region is probably one of the busiest and most interesting places in the world to have a Raspberry Shake set up and gathering data around the clock.

The first months of 2020 have seen my device catch some of the clearest and most impressive traces from two local and reasonably strong earthquakes. The first, a M5.3 less than 60km to my NE triggered the government emergency alert system. This was a terrifying alarm and haunting voice urgently broadcasting “Jishin desu” – Earthquake!

Thankfully the shaking was modest, but the Raspberry Shake traces were awesome. Note the twin traces from another M5+ earthquake nearby an hour earlier. 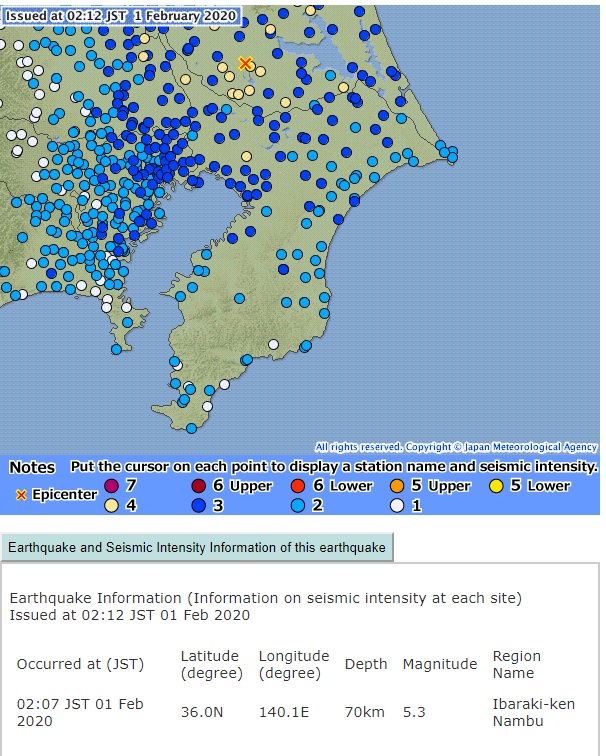 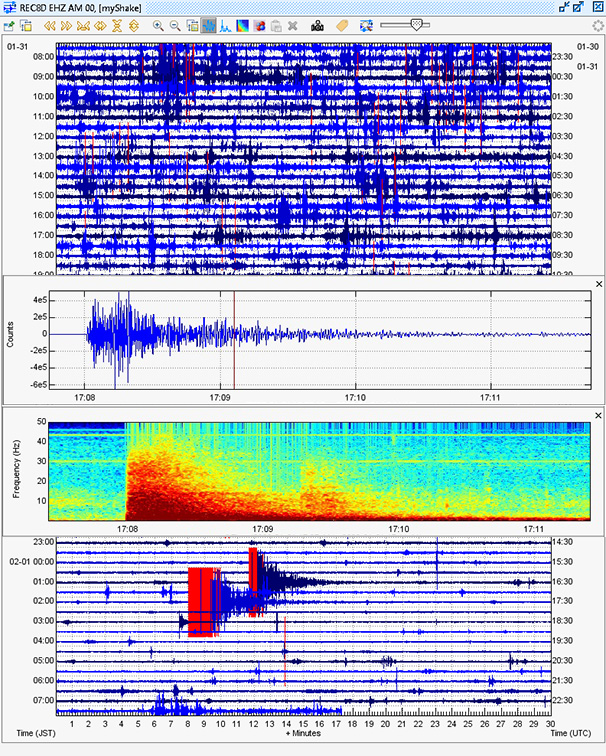 The M5.3 earthquake that occurred on February 1st 2020, captured on the Raspberry Shake

Just two weeks earlier, on the 14th of January 2020, the Raspberry Shake recorded some of its most intense shaking.  A M5.0 earthquake, the epicentre very close to the shake mentioned above. 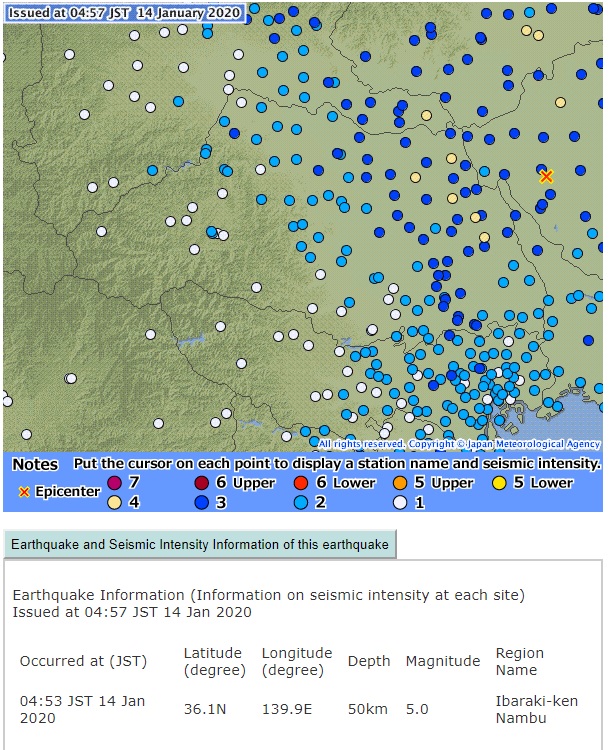 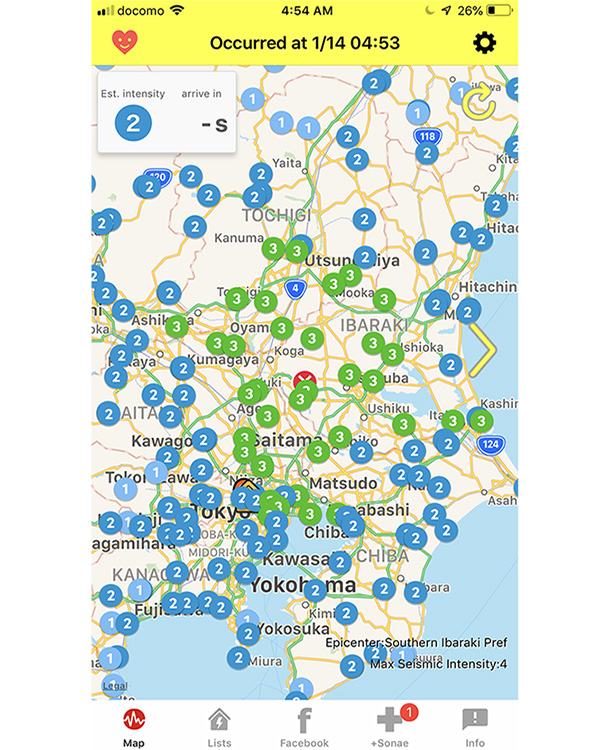 Lots of seismic activity was recorded on January 14th, shown here by the Japan Meteorological Agency and the Yurekuru earthquake mobile app

The earthquake occurred at around 4.50am, a perfect time to record seismic traces given the lack of background “noise” such as passing trucks, my kids jumping around near the device, etc. The earthquake shook me awake, made the house creak and lasted for what felt like 20 seconds or longer. Another gentle yet unnerving reminder of how earthquake prone Japan is. 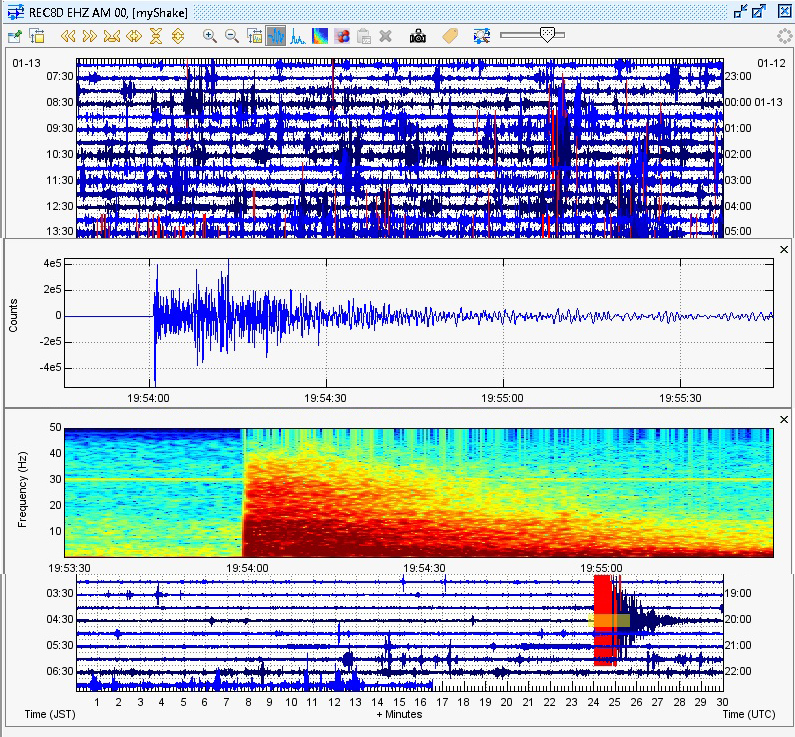 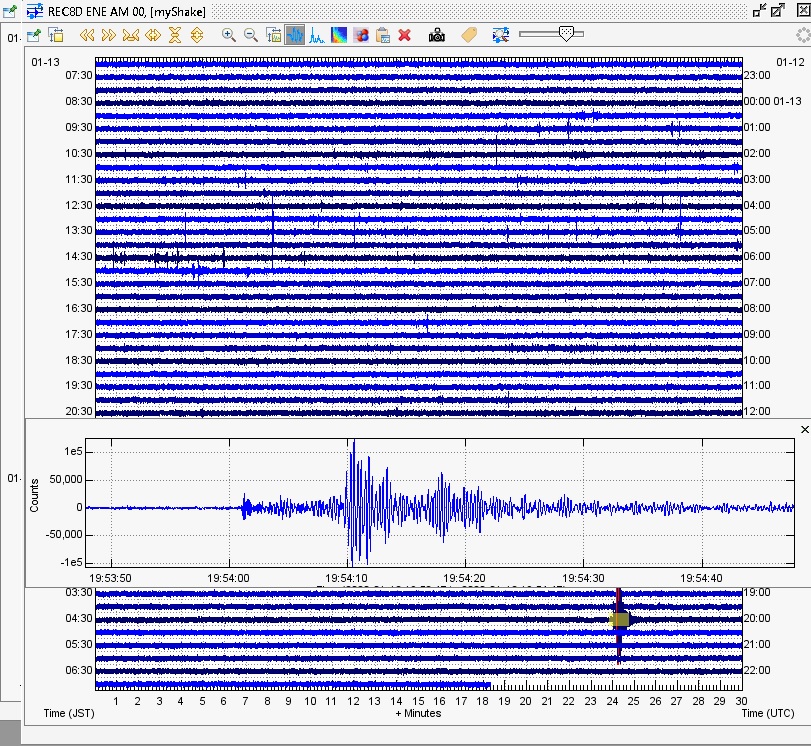 One day Tokyo and the surrounding areas will be hit by a powerful and dangerous earthquake. This is an unpleasant certainty that we can do nothing about other than keep well prepared with emergency supplies, regular education and earthquake drills. Hopefully that day is far off. For the immediate future my earthquake experiences continue to be the occasional gentle shaking of the bed and plenty of nice clean traces on my Raspberry Shake that give me a clear picture of exactly what’s going on beneath our feet.

At Raspberry Shake we would like to say a big Thank You to James Reynolds for sharing his story. When James first joined the Shaker community he expressed concern about his limited technical knowledge. On receiving his device, he had his Station up and recording shakes in no time and has become a very active member of the community, often sharing his Shake activity on his Twitter channel @EarthUncutTV. It is amazing to see how passionate James has become about his little seismograph, which really does show that it’s possible for just about anyone to become a “Shaker”!