The Monterey Bay Aquarium Research Institute (MBARI) has deployed a Raspberry Shake seismograph at around 900 meters (3000 feet) below sea level, off the coast of Monterey, California. This is a groundbreaking achievement considering that these devices were never designed for use underwater making this the very first Raspberry Shake Ocean Bottom Seismograph (OBS).

The Monterey Accelerated Research System (MARS) is a cabled observatory that was designed to support and be a test-bed for the National Science Foundation’s Ocean Observing Initiative. 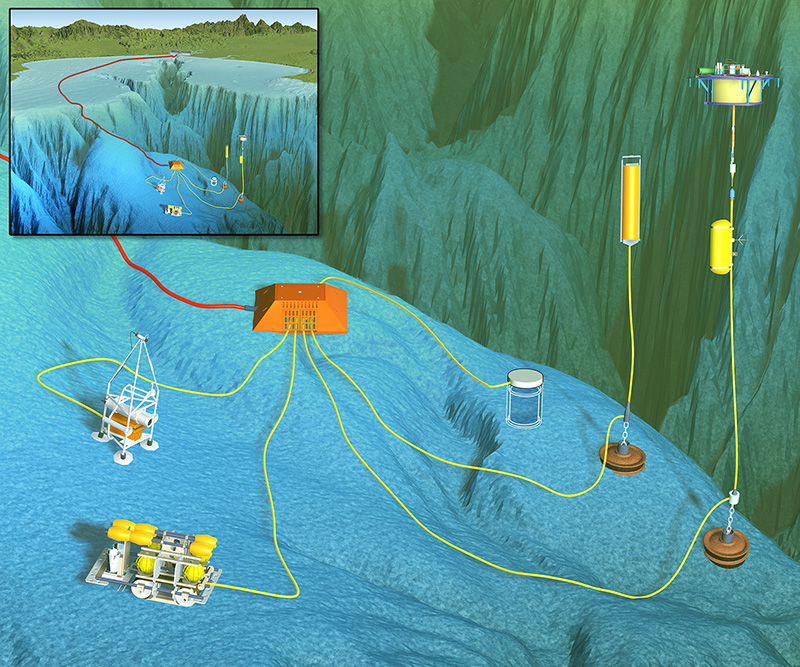 Most oceanographic instruments on the seafloor have no connections with the surface, so they have to run on batteries and store their own data. A cabled observatory like MARS removes those restrictions, allowing scientists to design new types of oceanographic equipment and study the ocean in new ways. MARS provides electrical power and data connections, allowing researchers to control and assess the functionality of deep sea instruments in real time.

MARS is located 22 miles (35 km) due west of Moss Landing, California, 891 meters (2,923 feet) below the ocean surface. The main science node (and all science experiments to date) are located on Smooth Ridge. Smooth Ridge is a broad, gently sloping underwater plateau and part of the continental slope—the transition zone between the continental shelf and the abyssal waters farther offshore. 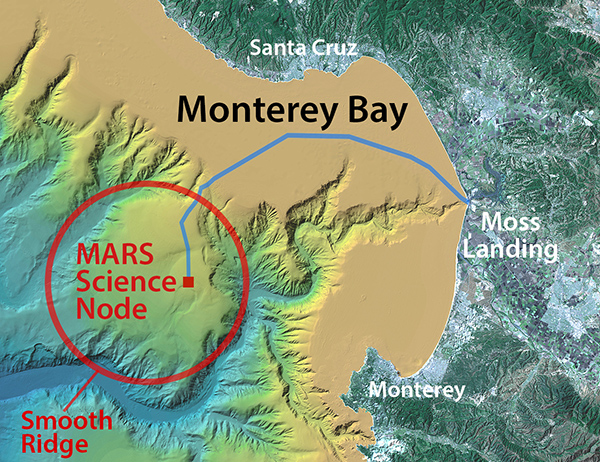 The MARS observatory is connected to shore through a 52-kilometer (32-mile) seafloor cable that acts as a giant extension cord. At the end of this cable is a “science node” with eight ports that provide electrical power and a high-speed data connection between the observatory and instruments on the seafloor.

This illustration shows the MARS science node in its trawl-resistant frame. The main MARS cable from shore enters the node from the left. On the right are four of the eight “extension cables” for individual MARS test experiments. Steel doors on the sides of the node can be opened so that remotely operated vehicles can plug or unplug connectors. Sophisticated electronics within the science node route data and convert the high voltage current in the cable to lower voltages needed by instruments. Illustration courtesy of L-3 MariPro. Image: © MBARI

Unfortunately, the waterproof power and data connectors used on MARS can cost up to $50,000 dollars each. This means that, historically, only well-funded researchers have been able to use the observatory.

Dawe and French developed Deep-Sea Connect to address this issue. Their hope is that the new system will allow additional researchers, and perhaps even school groups, to take advantage of the awesome potential of the MARS observatory.

POWER & CONNECTIONS
When work on the project began the team opted to use commercial off the shelf (COTS) products that were affordable and could perform the required functions. Several candidates and methodologies were identified that could support wireless data and power transfer. The final hardware selection was mainly due to what seemed to present the least challenge to “marinize”.

Another aim of the project was to simplify the mechanical connection process, necessary to supply power and internet to connected devices.

After some trial and error the team resolved this by developing two flat plates that when placed in proximity to each other and twisted, form the wireless connection. 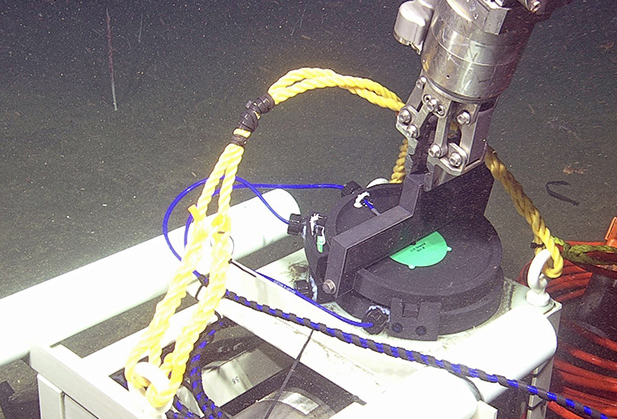 The flat plates that form the wireless connection. Image: © MBARI

REAL-TIME SHAKE DATA
To verify the Deep-Sea Connect system Dawe and French began a search for a device that could provide real-time data at a reasonable price point.

In the early days of MARS there had been a broadband seismometer deployed, which has since been decommissioned and not replaced. During the search for devices they came across the crowdfunding page Kickstarter.com, and discovered the Raspberry Shake.

The Raspberry Shake seismograph met all of the teams criteria and will fill a data gap that has been present for a number of years.

SEA PROOFING
According to Dawe, “Challenges are present anytime you put something in the ocean. We do our best to engineer around them and sometimes we rely upon luck.” One of the biggest challenges for the team was getting the components assembled and in a form that would function deep in the ocean.

The COTS products selected to use as part of this project were not designed to be used underwater, let alone at depths where pressure is amplified. To ensure they would function in a deep water environment, the team took these devices and “marinized” them.

The process usually involves pressure testing a products electronics, to determine its pressure tolerance and replacing the components that failed with more compatible parts. 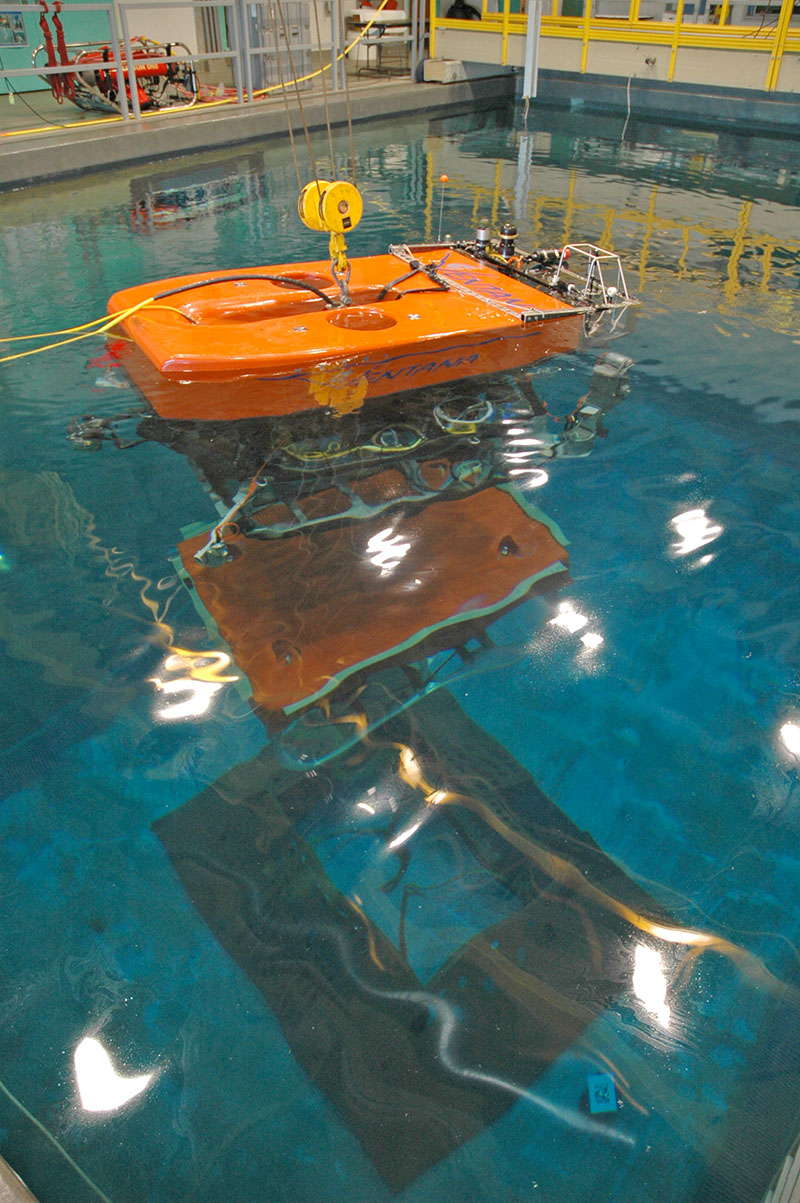 The test tank on site at MBARI. Image: © MBARI

For the “Deep-Sea Connect” project the antennas of the chosen devices were waterproofed by casting them in degassed plastic resin.

The molds used for the antennae became the alignment devices for manipulation by the remotely operated vehicle (ROV). The rest of the electronics were housed in transmitter (multi connection) and receiver (single connection) titanium housings. The transmitter and receiver assemblies were designed with Fiberglass Reinforced Polyester (FRP) materials with titanium hardware for reinforcement where required. 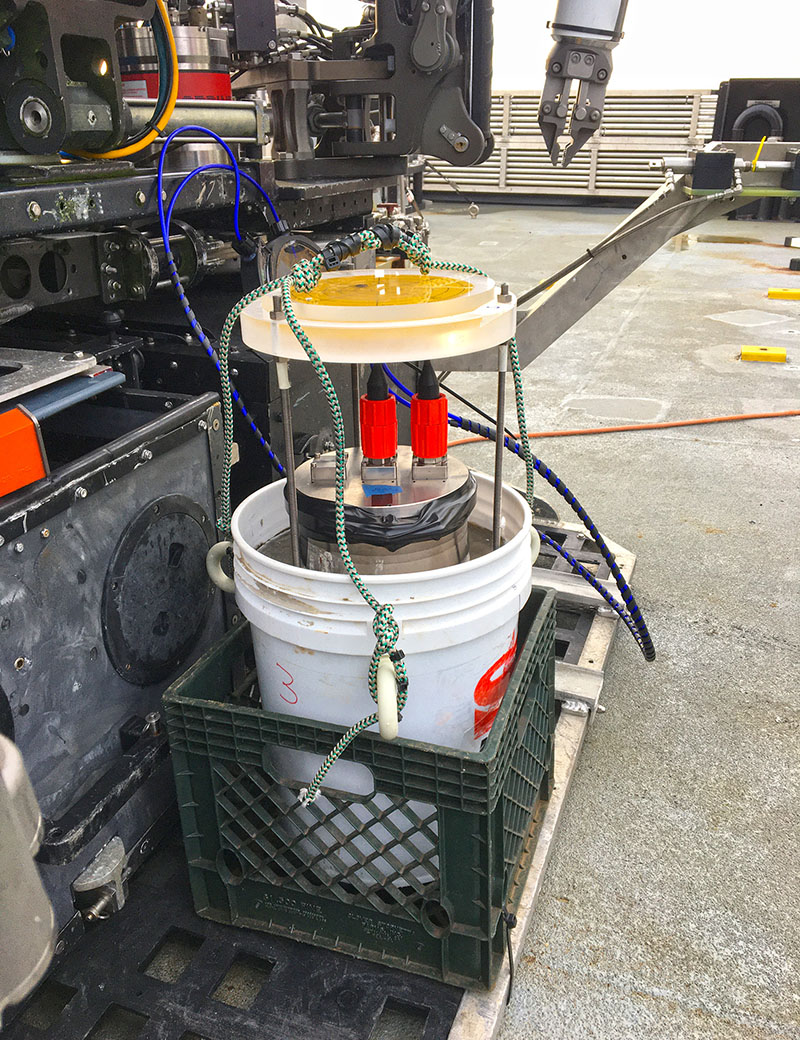 The Raspberry Shake inside a water tight housing designed to withstand up to 4000m (13100 ft) below water. The plastic container it is mounted in is filled with concrete. Image: © MBARI

After both dry and wet testing in a controlled environment, Deep-Sea Connect was ready to be put to the test out at sea. 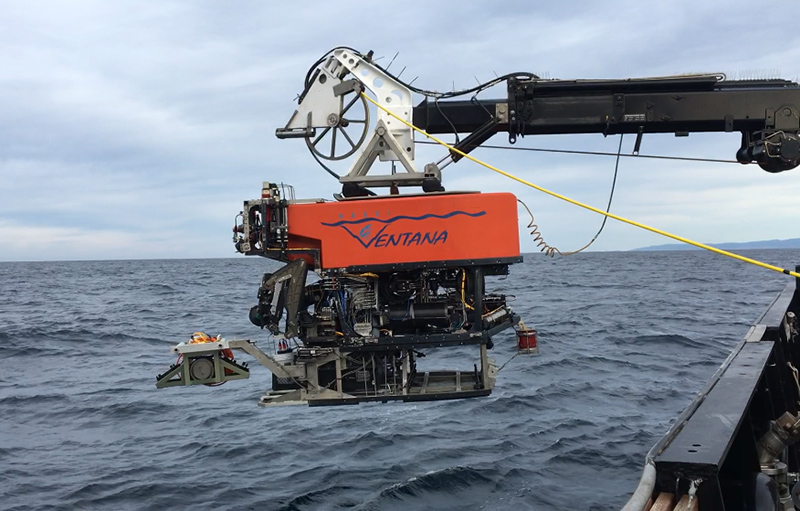 The final unit consists of a small fiberglass frame with a titanium pressure housing that holds the “brains” of the system. On the sides and top of the frame are black plastic “paddles” that use radio waves to transmit power and data wirelessly underwater. 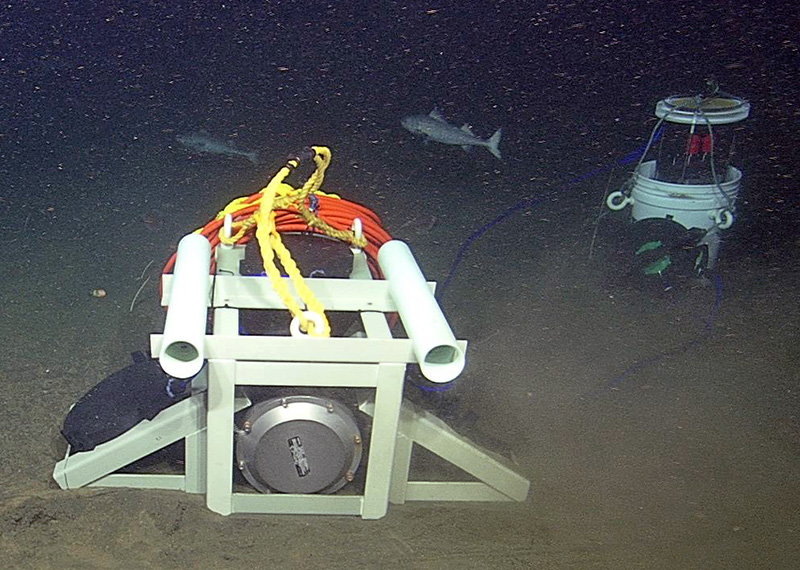 This image shows the Deep-Sea Connect system (foreground) and the Raspberry Shake seismometer (background) just before the instruments were connected to the MARS observatory. Image: © MBARI

As an initial test for the system, the engineers hooked up a small, inexpensive seismometer called a “Raspberry Shake.” Based on the popular Raspberry Pi microprocessor boards, Raspberry Shakes can provide earthquake data comparable to that from professional short-period seismometers.

For their test deployment, the MBARI researchers packaged a Raspberry Shake inside a waterproof housing and added a wireless connector paddle to connect the unit to the main Deep-Sea Connect system.

After using remotely operated vehicle (ROV) Ventana to carry the instruments 900 meters (3,000 feet) down to the seafloor, the ROV pilots simply placed the paddle from Raspberry Shake on top of one of the paddles on the Deep-Sea Connect system and voila—data from the Raspberry Shake began flowing into the observatory network. Within a matter of hours, the data was visible on the Raspberry Shake website. As Dawe noted, “There are over a thousand Raspberry Shake sites around the world, but ours is the only one in the water.” 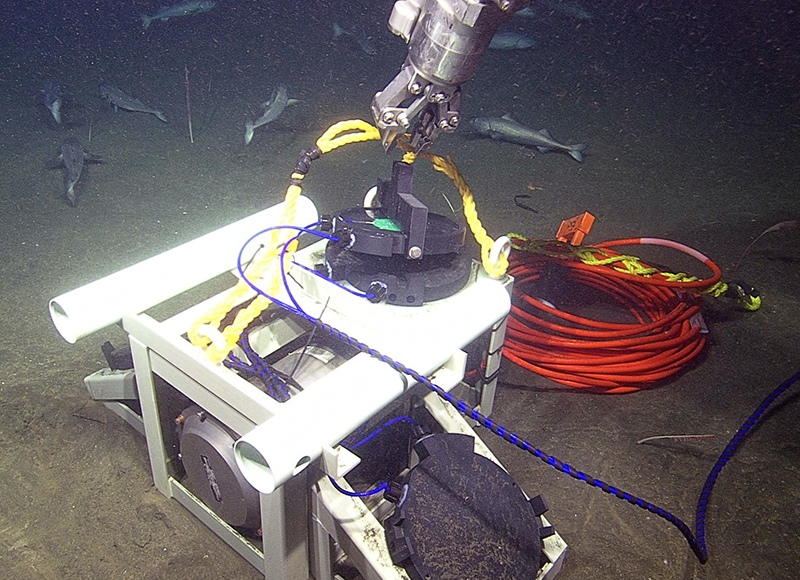 This image shows the manipulator arm on ROV Ventana placing a wireless connector “paddle” from the Raspberry Shake on one of the paddles on the Deep-Sea Connect system. Image: © MBARI

The Deep-Sea Connect system transfers data and power wirelessly using radio waves. In most cases, radio waves aren’t useful for communicating underwater because they don’t travel far through seawater. However, the paddles on Deep-Sea Connect are only about a centimeter apart, so high-frequency radio waves from one paddle can easily be detected in the other paddle.

For the initial deployment, the researchers packaged the Raspberry Shake inside a pressure housing that was previously used on one of MBARI’s underwater robots. They used a 3D printer to make the plastic paddles and bought an off-the-shelf wireless power transmitter. They embedded the power transmitter and a small WiFi antenna in epoxy resin to protect them from the pressure of the deep sea. Engineers from the wireless power manufacturer, Wibotic, helped the MBARI researchers tune the electronics in the paddles to work efficiently in seawater. 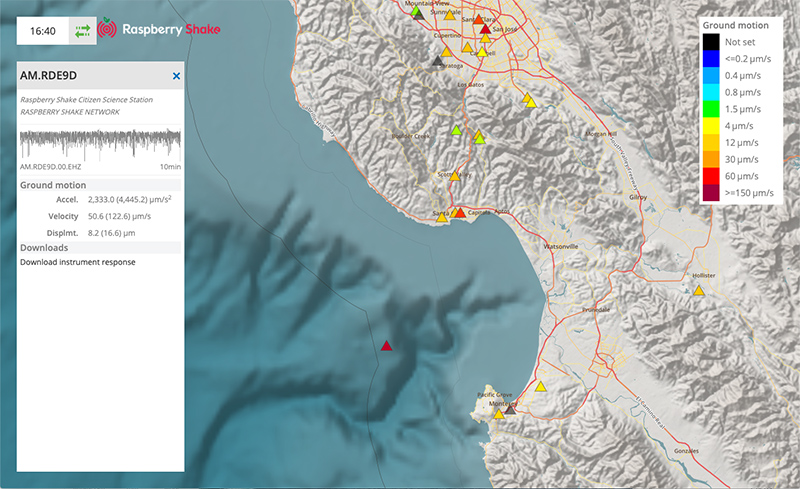 The red triangle offshore of Monterey Bay shows the approximate location of the Raspberry Shake seismometer on the MARS observatory. Live data from the seismometer appears on the left.

“This was just a trial run—a proof of concept,” said Dawe. “We’ll leave the system out for a few months and see how it behaves. Then we’ll probably recover it and make some improvements.

“Once we know the system is reliable, we’ll be looking for individuals or groups that would like to hook up new instruments—cameras, hydrophones, or whatever,” he said. “This could be for research, education, or outreach. We’ll even provide the paddles. The overall cost would depend on the instrument, but I think the connection could be done for a few thousand dollars.

“Our overall goal is to find and encourage new users for the MARS observatory—teachers, students, or researchers without a lot of money,” Dawe concluded. “We’re particularly interested in finding ways of getting data from MARS into school classrooms, so we can help inspire the next generation of ocean scientists and engineers.”

At Raspberry Shake we would like to say a huge thank you to David French, Craig Dawe and Kim Fulton-Bennett from MBARI for sharing the details of the Deep-Sea Connect project. We are thrilled that our little seismograph is part of this amazing adventure and that thanks to your team the first Shake is streaming live from the ocean floor. We can’t wait to hear how this project develops. Good luck!